About our online virtual murder mystery parties and events

We offer a choice of two plots for our COVID-proof, virtual murder mystery events – Sherlock Holmes: The Case Of The Magician’s Inventor and Dead Dogs Tell No Tales.

This event requires a minimum of 8 people but there is no upper limit. You will need to nominate between 8 and 12 guests to play the part of suspects with all other guests playing the part of detectives.

The interactive nature of this event makes it perfect for a variety of different occasions including corporate team building days, Christmas parties, birthday parties and hen nights.

How does an online mystery work?

Ahead of the event, we’ll ask you to nominate between 8 and 12 guests to play the part of suspects. We’ll then contact these individuals with the details of the character they’ll be playing as well as a selection of clues, secrets and motives.

On the day in question your group will meet on Zoom where they will be joined by our detective. The plot will unfold as each character discovers their part in recent events, finally leading to the shocking revelation that one of them is a killer!

The exact running order depends on your group size but generally, the detective would interrogate 3 suspects before introducing a clue such as a map or a blackmail note.

After the breakout rooms we return everybody to the large group with the actor and continue interrogating the suspects and introducing further clues.

The cycle of interrogations / breakout rooms would continue until all suspects had been interviewed. At the end we would ask each team to nominate a spokesperson and guess who they think the murderer was and why.

After hearing your theories, our detective will sum up all of the key clues and unveil the murderer. It’s important to note that prior to this, nobody will know who the guilty party is, not even the murderer themselves. With the killer unmasked, it’s time to see whether you guessed right or got sidetracked by red herrings! Two prizes will be awarded, one to the best suspect and one to the spokesperson of the winning team.

Fancy dress is optional but highly recommended, it certainly adds to the fun.

You’ll need to invite your guests and then provide us with a list of their names and email addresses. You’ll also need to let us know which of the guests is playing the part of a suspect.

Ahead of the event, we’ll email all of your guests with a Zoom link and some PDF clues. If your guests have printers they can print the clues in advance but if not they can all be viewed electronically.

What does the production co-ordinator do?

In addition to the actor we also provide a behind-the-scenes production co-ordinator to ensure everything runs smoothly. This person will act as the main Zoom host allowing the actor to focus on acting! The production co-ordinator will spotlight the actor and suspects, display clues on screen, encourage use of the group chat box, control the breakout rooms and answer any questions from your guests. This adds a really polished finish to the event and is often complimented by our clients.

The first step is to contact us and check availability of your preferred date and time. If you decide to go ahead we’d issue an invoice which can be paid via bank transfer or credit / debit card (we accept American Express). Once the payment has been received we’d book everything in and start to guide you through the planning process. “…the event was amazing! Honestly!
My guests had so much fun. Your actor adapted in situation really well and was just a really lovely guy and played the character very well. Thank you all so much” 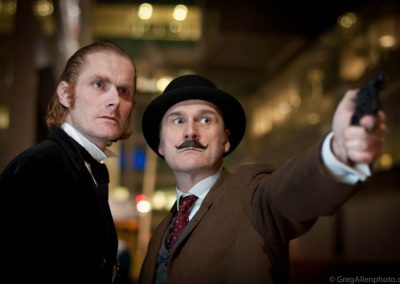 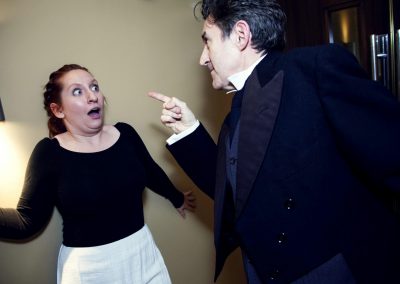 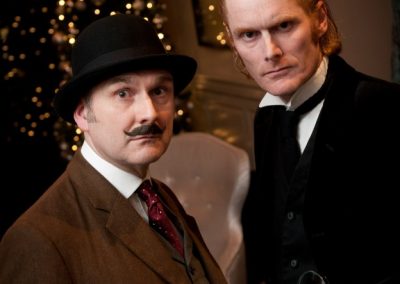 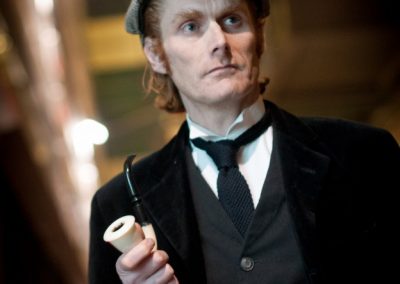